Both models in this Roomba 614 vs 675 comparison are good choices for budget-conscious folks who don't need a robotic cleaner with a lot of bells and whistles. The Roomba 675 is a slightly newer and more expensive model, but, generally, both cleaners clean the floor with nearly identical features: an iAdapt navigation system with smart sensors, an AeroVac filter, and identical, multi-surface brushes.

The majority of robots in the 600 series have a suction power of 600 Pa, and these two are no exceptions. Of course, this is a low suction level, but the bots still pick a fair amount of dirt, dust, and pet hair.

The dustbin capacity of the Roomba 614 is almost twice bigger than that of the Roomba 675: 600 ml versus 350 ml. For this reason, the earlier model is bigger and less maneuverable, but it frees you from having to empty the garbage can constantly.

The iRobot Roomba 614 vs 675 noise level battle demonstrates that both cleaners emit around 60 dB of noise, which is comparable to an average conversation and background music. To be precise, the 614 emits 61 dB and the 675 produces 65 dB.

The first point that should be mentioned in the Roomba iRobot 614 vs 675 on-carpet performance comparison is that both models are capable of cleaning all types of carpets. However, actually, neither of them can clean thick and fluffy carpets well; they just aren't powerful enough.

The cleaners all use the same main brush, which is made up of two pieces. It penetrates the carpet fibers with gentle bristles and removes big dirt using rubber paddles. So, there is nothing to compare in terms of carpet cleaning. 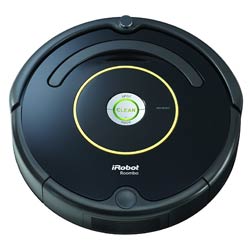 The iRobot Roomba 614 is a decent purchase for the people who look for a no-frills robot vacuum. The sensors of this device adjust to all floor changes in your dwelling. Furthermore, this model uses ...

The iRobot Roomba 675 review highlights the features and sheds light on weaknesses of an entry-level robotic vacuum. This is a cleaning robot with a Wi-Fi and app control capability, an extended batt...