Despite the fact that the Shark ION ROBOT 750 vs ECOVACS DEEBOT N79S have the same battery capacity (2600 mAh), the first model can work on a battery nearly 90 minutes and the ECOVACS – 100 minutes.

The ECOVACS DEEBOT N79S vs Shark ION ROBOT 750 dustbin capacity comparison shows that the first device has more capacious container (450 ml versus 380 ml). The N79S has a Max Mode Suction, while the 750 doesn’t have such a feature, but despite this peculiarity, the pressure in both models reaches 1000 Pa. They suck up things that are small and light enough to get swept into the bin.

Both devices can work on the 1000 sq. ft. areas, but Shark is better to use in smaller rooms. They have modern sensors that allow cleaning floors and carpets without hitting the walls. The Shark greatly avoids obstacles while for ECOVACS I have to clean the area from small things and cords.

The difference between noise levels isn’t really great. The 750 has 60 dB while the N79S – 67 dB. The Shark ION ROBOT is hardly heard while being in the cleaning room and the ECOVACS DEEBOT produces louder sounds that distract from time to time.

The Shark ION ROBOT’s brush is able to remove long hair, string, and fibers, which are on the fleecy carpet. The ECOVACS DEEBOT misses some small peanut shells and leaves some balls of fur. 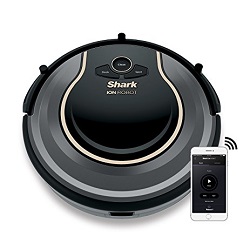 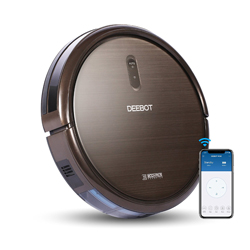