The Brother SE1900 vs PE800 review compares premium Brother embroidery machines. Both of them are high-tech, computerized, and fully automatic, with a large color sensor LCD display. Nonetheless, the SE1900 is a more advanced and more expensive option as it additionally offers a sewing feature, whereas the PE800 is only an embroidery machine.

Both machines have a large number of built-in embroidery designs—138. They both also have 11 fonts. Since the SE1900 can also be used to sew, it additionally features 240 built-in stitches. Besides, it also contains 6 alphabet fonts, 10 buttonhole designs, and 5 lettering sewing fonts. So, if you compare the Brother PE800 vs SE1900 built-in features, the SE1900 unquestionably comes out on top.

Using the built-in USB port, the compared models allow you to import embroidery patterns. This way, you have nearly endless embroidery possibilities with these machines as you can use a computer to make your own distinctive custom designs and download them into the memory of these machines.

My Brother SE1900 vs Brother PE800 design analysis didn't show any serious differences. Both have an equally large embroidery field of 5 x 7 inches. The screens are also of the equal size—3.2 inches in diagonal. The interface and arrangement of controls are also the same. The SE1900 just has one more button for stitch selection.

The primary distinction between the models, as demonstrated by this Brother PE800 vs Brother SE1900 comparison, is that the SE1900 has a sewing feature while the PE800 does not. All of the other features are the same, as is the user interface. 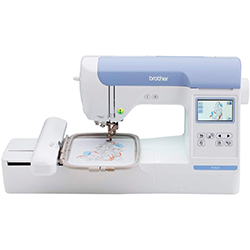 Brother PE800 is a computerized model to embroider, quilt, and do appliqué. It has 138 built-in patterns and 11 fonts that look accurate and professional. Its max speed is 650 SPM. The unit&rs... 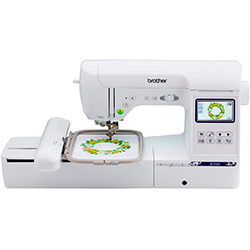 One of the most significant features of the Brother SE1900 is its spacious 5 x 7 inches field for embroidery, which is significantly larger than that of other sewing machines. As a multi-purpose mode...

dust cover
has not